This little story was published in September 1988 in issue one of Mountainbike New Zealand (a magazine that Paul put out for a few years). The photos are all water damaged (do not adjust your screen). 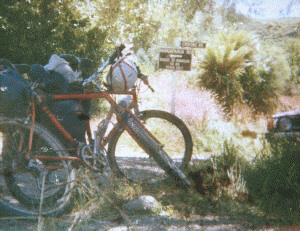 At two a.m. three brothers hopped off the Northerner at Ohakune and found a dry patch under a large tree to sleep.

We rose with the sun and had the road riding to the start of the Mangapurua Track out of the way by noon.

The track is the remains of a road which once ran through the rugged Mangapurua Valley, across the 'Bridge to Nowhere', and on to the Whanganui River. Back in the 1930's the valley was home to 45 farming families and a school. But the land refused to be tamed, and slowly they left. In the 40's the road was officially closed due to slips, and the valley has now been deserted for decades. 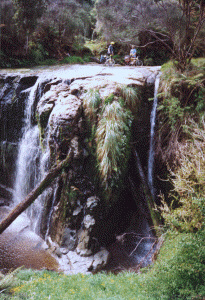 The track starts with a steady climb to the 660 metre top of Mangapurua. Paul, Jonathan and I were rewarded with excellent views of the Whanganui National Park and the mountains of the Central Volcanic Plateau. Then it was off down the other side, into the Mangapurua Valley. 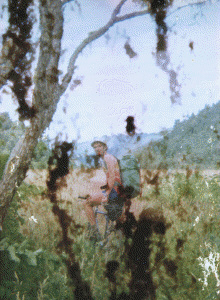 About half way down, where the 4WD turns into single track, Jonathan got his front wheel caught in a rut. He performed a particularly original flying dismount and somehow managed to bend his left seatstay so far that the rear wheel refused to turn. "No problem", said Paul with a grin from ear to ear. He whipped out the wheel and lay the frame over a rut with the bent stay pointing skywards. While Jonathan gritted his teeth, Paul jumped enthusiastically up and down on the frame. Zero for style, but 10 out of 10 for results.

Once in the valley we found a nice clearing and made ourselves a comfortable camp for the night. 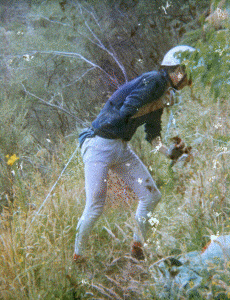 The dawn revealed another fine day during which the temperature would approach 30 degrees Celsius.
We set off, keen for adventure and curious to see what sort of track lay between us and the bridge. It turned out to be like a gigantic observed trials course, which wound its way through young native bush, clearings of tall grass, over the top of a waterfall and across the sides of huge cliffs. 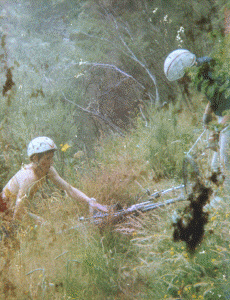 In many places the streams have carved incredibly deep narrow gorges from the limestone. Although it was mostly rideable (in first gear) the going was slow due to the many fallen branches, tricky stream crossings and the dehydrating heat. Along one cliff Jonathan's front wheel suddenly slipped off the narrow track. He fell four metres - then slid the same again before getting a decent grip of a solitary flax bush about 40 metres above the bottom of the gorge. He climbed back up OK, but we had to use a rope to haul his bike up to the track. 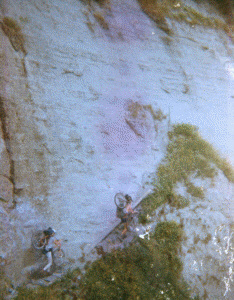 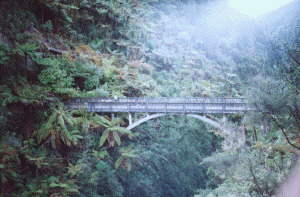 Shortly after lunch Paul's rear derailleur broke, leaving him with a single gear. At about three o'clock, while weaving our way through a patch of fairly dense bush, the Bridge to Nowhere appeared before us. We had seen photos of the bridge, and anticipated riding over it for weeks, but it was still a real surprise. Imagine a large concrete road bridge, 125 feet above a small stream in a deserted valley 30 kms from the nearest road. We rested and pondered for a while, then nipped down to the Whanganui River, two kilometres away.
It had been a classic days mountain biking. We were stuffed, yet had covered little more than ten kilometres in six hours. 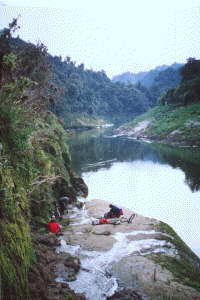 We were now about 30 km upstream from Pipiriki and had no intention of going back the way we'd come. 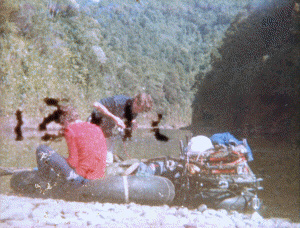 Instead we unpacked several metres of twine, a foot pump and four tractor tyre tubes. After a few hours of feverish activity we had ourselves a raft and paddles (built with dead branches).
A canoeist had told me it would take six to twelve hours to float down to Pipiriki, so an early night was in order.

We'd had breakfast, checked the raft, tied the bikes onto the rear tube and were on the river soon after eight. Ye haa! It floated! We were lying back on the tubes relaxing when a Dept of Conservation jet boat came past. "How long do ya think it will take to get to Pipiriki?" I asked.

"At that rate, about three days", the ranger replied.

After that we paddled hard for the rest of the day.

The river was so slow in places it was difficult to detect any flow at all. In a couple of shallow parts we sped things up by towing and pushing the raft.

Occasionally day jet boaters passed and circled, exclaiming amazement. In the early afternoon, Paul decided to hop on top of the bikes to film the next rapid with his super-8 camera. He got about halfway up and the rear part of the raft capsized, throwing him and our cameras into the river. You can imagine our reaction.
By about ten p.m. we were becoming exhausted and anxious. Paul started showing the early signs of hypothermia, and brotherly love was pretty scarce as Jonathan and I argued over the best route through rapids. In parts the brightest sources of light were the glow worms on the cliffs, followed by the stars and patches of shining white water. The calmer moments were pure magic.

At about 10:30 we tackled the last, most exciting rapid and got wet from head to toe. After more than 14 hours we dragged the raft, and ourselves ashore, still several kilometres from Pipiriki, but near the start of a 4WD track heading that way.

We got up a 5:30 am, faced with a single muesli bar left for food and 130 kms of 4WD, gravel and sealed road left to cycle. With a train to catch from Marton at 3:30, there was no time to spare. We were away by seven after dismantling the raft and assembling the bikes. Paul was still stuck in a single gear and now had a loose crank, while Jonathan began struggling with all his gear on his back in a pack. After about 70 kms a farmer gave us a brief lift in his old truck, till it broke down. Luckily he got us over the biggest hill of the day and we soon arrived at a shop with FOOD. Once well refuelled, the final 55 kms of sealed road was tackled at pace and we made it just in time.

While recovering on the train, I reflected on the events of the past four days. It was a classic trip, which we'll never forget, but we could have made things a lot easier on ourselves.
Posted by Paul Kennett at 3:56 PM No comments:

Copyright belongs to the respective authors.